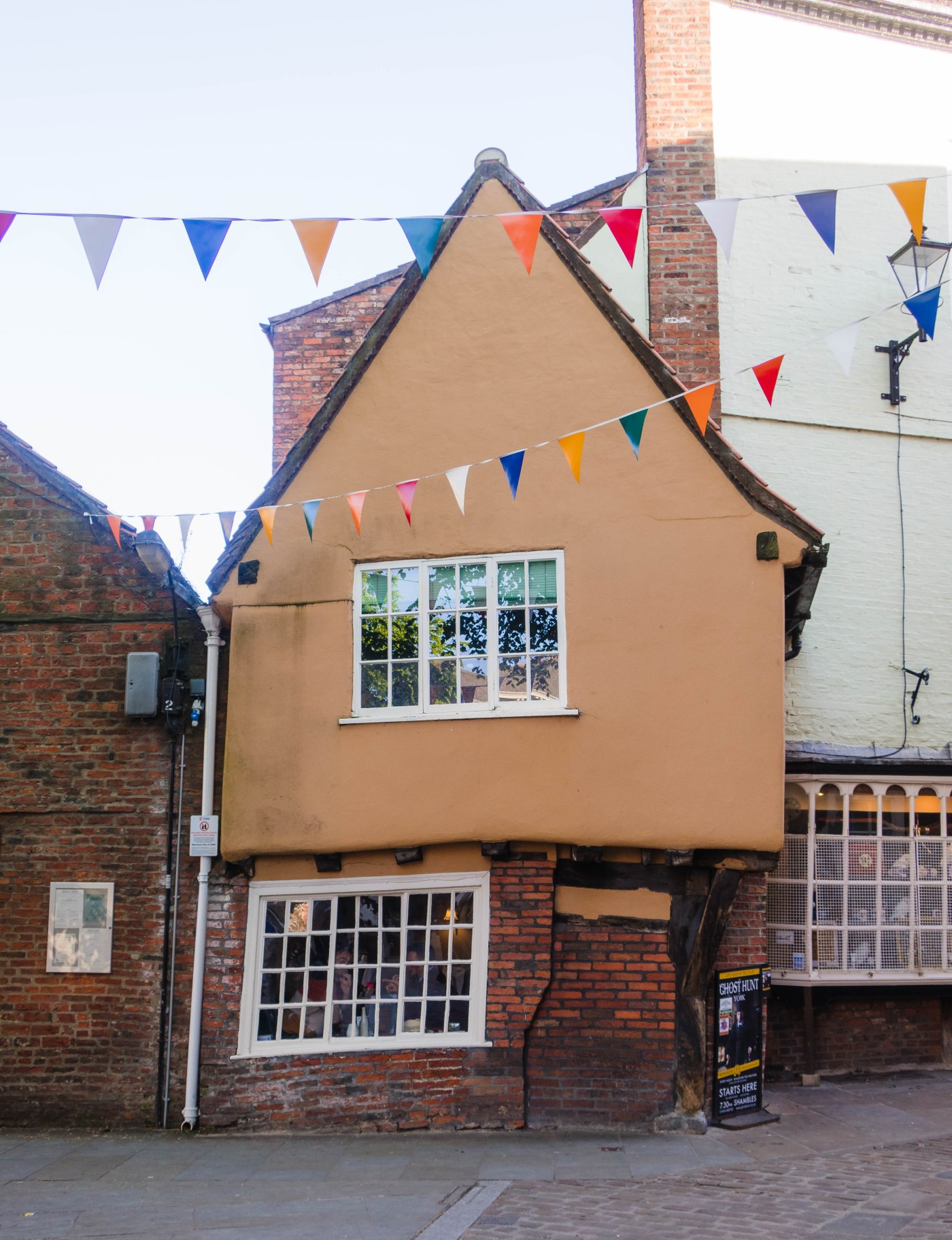 We stayed at the Elmbank Hotel, located conveniently along a road (the Mount) that runs straight into the historic city centre and skirts close to the National Railway Museum as well. It is a beauty of a hotel, but if you read the reviews, you’ll find many patrons found the Elmbank’s rooms dated, dusty, and in need of some attention. Having done this, I wisely decided to pay the fee to upgrade to a superior room. I’m glad we did, as the room we ended up with had with modern amenities (including air-con!) and a little more privacy than the rooms in the main building. It was also very clean and felt quite new; no trace of the mold others complained about in the older rooms. We skipped the breakfast per other reviewers’ suggestions; the walk into town leads you past two grocery stores, and since the room is equipped with a refrigerator, it was easy enough to put together our own meal in the mornings. The Elmbank has free parking, which is wonderful as it’s so close to the centre of York you may as well save yourself the hassle of driving into it and walk instead.

It’s tempting to stick with what you know when it comes to ale, but with so many pubs, taverns, and bars ranging from traditional to new-age, York is a city that invites you to try a pint (or two) of something different.

Luckily, it is a lovely walk that takes you over the River Ouse and right past The King’s Arms pub, which appears frequently in the news when the river breaks its bounds and floods the restaurants and shops that line it. Fortunately, our time in York was marked by full sun and not a drop of rain; it was not a hard decision to make The King’s Arms our first stop. We sat with our feet dangling over the water and enjoyed a pint of Samuel Smith’s. What better place in which to enjoy Tadcaster ale?

Ghosts seem to be present all over York; at the end of the Shambles sits the Golden Fleece Inn, rumoured to be York’s most haunted pub. In the maze of rooms inside, the closeness claustrophobic at times, it did feel like someone else was there unseen. Luckily the Grey Lady left us alone.

If you prefer your pint without a side serving of paranormal, Pivni, located just off the Shambles, is happy to oblige. We popped to the multi-storey pub one evening to sample some of the many craft beers it offers- and it does offer a lot (more than 50 beers available ranging from the standard to the odd). Wine and cider are available if beer isn’t your thing, but even if it’s not, you might be tempted to try some of the unique brews they have.

Maybe you need a break from beer (seems absurd as a statement, I know). Luckily, there is no shortage of tea rooms and ice cream shops in York.

The Earl Grey Tea Rooms, right off the Shambles, has a lovely little surprise in the back: an outdoor garden where you can sit in the cool shade of an ivy wall and enjoy cream tea. As a bonus, they serve their scones with clotted cream, which is much more uncommon in the north. Enclosed in a courtyard, it feels like it’s miles away from the hustle and bustle of the tourist scene outside.

For a really special treat, try the Luxury Ice Cream Company. LICC, as it’s known, is unapologetically over the top, embracing its role as every child’s candyland fantasy. Their handmade ice cream comes in unique flavours; I had no complaints about my ginger biscuit one, which came blended with crunchy little bits of the biscuit itself. You’re never too old for ice cream, but if you blame your kids for stopping here, no one ever needs to know.