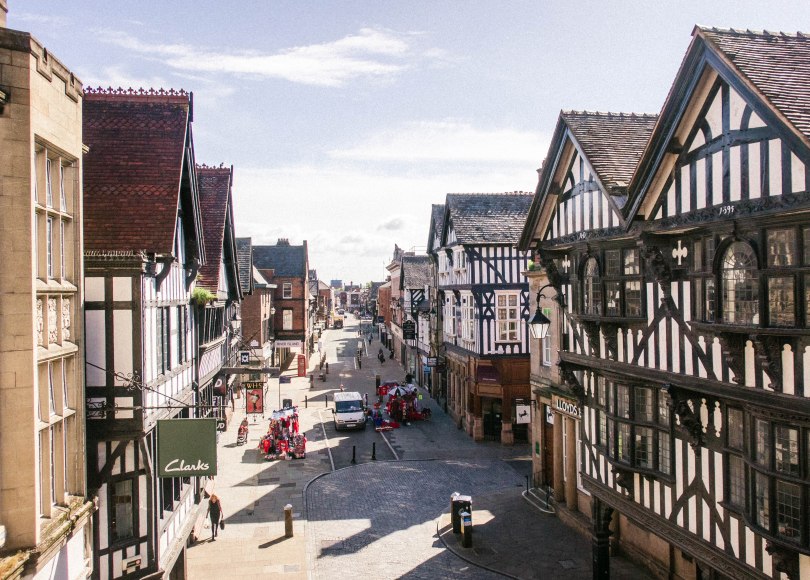 It’s hard to imagine a more picturesque city than Chester. Founded as a Roman fort on the River Dee, Chester lies at the border between England and Wales, and has switched hands several times through the Dark and Middle Ages. While its Roman inhabitants called it Deva Victrix, the city has also served as a garrison both for the Welsh and against them, as well as by the Saxons against the invading Norse. It’s no surprise that, having been in existence since the 10th century, Chester has played host to a number of different peoples at various points in time. As I walked along its streets, the four main of which still follow the old Roman roads, I had a peculiar sense of the layers of history entrenched within the city.

Mention Chester to someone who’s been there, and it conjures up images of the city’s (highly photogenic) thoroughfares lined by the Chester Rows. These unique, multi-level black and white buildings and shopfronts with covered walkways may look like something out of the medieval period, but many are restorations completed during the Victorian era. The contrast of sleek, modern shops housed in overhanging timbered frames is delightful.

The best choice we made in visiting Chester was to get there before 9:00am, before the swarms of tourists arrived and the streets filled up. We meandered through a city just waking, strolling along its wide thoroughfares in relative peace. As an added bonus, we got to watch the bright rays of early morning sun wash over the half-timbered buildings. The city seemed to glow from within; Chester was absolutely radiant.

The Roman walls encircling the city still hold up to foot traffic today, and are a wonderful way to see Chester. We joined them at Eastgate, one of the city’s four main roads which date from Chester’s earliest times, having been the original entrance to Deva Victrix. Now it’s crowned by the Eastgate Clock, installed in the later 19th century to commemorate Queen Victoria’s diamond jubilee. It is purported to be the second most-photographed clock in England after Big Ben. From the bridge beneath the clock, we took in an elevated view of the wide thoroughfare before us. I imagined Victorians going about the business of their day and stopping to admire the clock, marveling at its striking red facade and gold script, scrolling wrought iron details, and copper cupola with its elaborate weather vane. After all, people are still doing that today.

Chester is one of those places where you need spend very little to enjoy it; every street you turn down in the walled city seems postcard-perfect. Even Chester’s lanes are full of charm; we poked down the wonderfully-named Lover’s Lane, featuring quirky shopfronts and one impressive ivy wall. String lights strung across the alley overhead added to the sense of whimsy.

Chester was only a stop for us on our Great British Roadtrip as we crossed from Wales into England, and I knew to really do the city justice, we needed a full day. High on my list for my next visit are the city’s Roman Gardens, by all accounts a lush oasis enclosed within the city walls and littered with Roman ruins, as well as Chester Cathedral and the Grosvenor Museum, filled with artefacts of Chester’s history. There is so much to see and do in Chester that, to be honest, I would need reasons not to come back to this city!