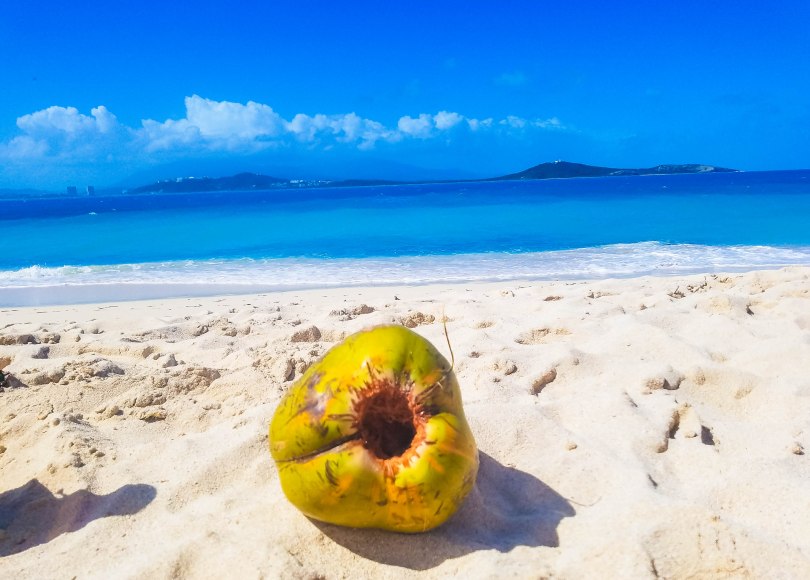 Rightfully so, one of Puerto Rico’s biggest lures is its beaches. They’re the definition of Caribbean living, all turquoise waters and white sand and swaying palm trees, and they’re not hard to find. There is an astounding variety of beaches on the island, from sheltered coves to surf-worthy waves, depending on location and geography. I was lucky enough to make trips to see two beaches particularly popular with the locals.

Caja de Muertos is a much-loved day trip from the city of Ponce. It is a small, wild island accessible only by ferry (operated by Island Ventures), and boasts clear water, pristine beach, and stunning views of the Caribbean. My friend who lives in San Juan strongly recommended we make the day trip over, and I’m so glad we did.

The catamaran departed from La Guancha, a popular lagoon-side boardwalk lined with restaurants and bars. (These of course were closed when we left in the early morning, but was the natural place to go for dinner when we returned.) The departure point for the catamaran was a little difficult to find, but made itself apparent as more people turned up. We found the staff to be very friendly and accommodating, as they made an effort to ask English speakers individually if they needed announcements made over the loudspeaker to be translated. (They were also extremely liberal with their pours of alcohol). It was an easy ride over to Caja de Muertos, and we were lucky enough to be accompanied by families and other couples rather than rowdy “spring breakers”.

Caja de Muertos is crowned by a steep cliff. At its foot lies a swoop of white sandy beach, punctuated by outcrops of rocks. We explored what we could of the island first and set up camp at one of the picnic tables, all of which have a covering to provide some much-needed shade. There is an old dock on the other side of the rocks; we hiked around it and were delighted to find a driftwood bench in the shade of a tree, as well as our own little bit of beach. Private sailing boats came and went, but otherwise the only disturbance we had was the cheeky birds and lizards begging for scraps. It really was paradise, at least until the tide came in and we had to give up our spot to the sea!

After that, we rejoined the other patrons on the main beach. The beautiful thing about Caja de Muertos, as a nature reserve, is that it’s impossible for it to get crowded. The only people there are the ones on the catamaran with you, ensuring you’ll never have to deal with a rammed beach. The island life mentality was also pervasive; everyone was relaxed, genial, and good humoured, but then, how could you not be?

Know Before You Go

None of these things bothered me, as I pretty much expected them from what I knew of these sorts of excursions. Still, I could see how people expecting a more luxurious trip might be left wanting. I could not have been more thrilled to be on a secluded island with the sea and sun for companions.

Closer to San Juan, in the nearby city of Fajardo, lies another wonderful beach. Cayo Icacos bears many similarities to Caja de Muertos; it too is an uninhabited nature reserve reachable only by boat. The ride is shorter, and manageable in a small motor boat which you can charter from a number of outfitters. (The trip is best made in good weather; skip it if the wind is bad and the waves high. Do not trust that the outfitters will warn you or try to dissuade you from going.) It is an easier getaway from Puerto Rico’s capital, and just as beautiful, if not as geographically diverse.

There are so many beaches to choose from in Puerto Rico, it would be easy to plan an entire holiday around them. But even if you only allot one day of your trip to a day by the water, you likely can’t pick wrong.

*Again, sorry for the sunscreen-streaked photos. Couldn’t be helped.